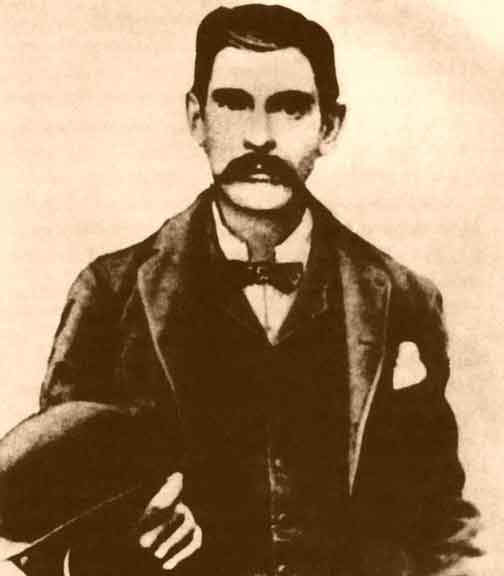 “I found him a loyal friend and good company. He was a dentist whom necessity had made a gambler; a gentleman whom disease had made a vagabond; a philosopher whom life had made a caustic wit; a long, lean blonde fellow nearly dead with consumption and at the same time the most skillful gambler and nerviest, speediest, deadliest man with a six-gun I ever knew.”

Doc Holliday was a gambler, vagabond, gentleman, and gunfighter. A friend to Wyatt Earp, he was deputized in Tombstone, Arizona, before the famous gunfight at the O.K. Corral.

Doc Holliday’s father, Henry B. Holliday, was a trained pharmacist. He served in several wars, including the Cherokee Indian War, the Mexican-American War, and a Major in the Confederate Army. After serving in the Mexican War, he returned to Griffin, Georgia, with an orphaned Mexican boy named Francisco Hidalgo. On January 8, 1849, Major Holliday married Alice Jane McKay and, within just a year, had a daughter, Martha Eleanora, who died in infancy. On August 14, 1851, John Henry (Doc) Holliday was born.

In 1857, Major Holliday inherited a piece of land in Valdosta, Georgia. He moved Alice, John, and Francisco to Lowndes County, where John Henry attended grade school at the Valdosta Institute, studying Greek, Latin, and French. Major Holliday quickly became one of the town’s leading citizens, serving two terms as Mayor, acting as Secretary of the County Agricultural Society, a Member of the Masonic Lodge, Secretary of the Confederate Veterans Camp, and the Superintendent of local elections.

When John (Doc) was just 15, his mother died of consumption on September 16, 1866 (later called tuberculosis.) This was a terrible blow to the teenager, as his relationship with his mother was very close. Compounding this loss, his father remarried only three months later. 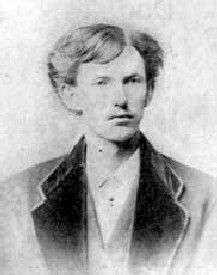 The family’s status in the community and the fact that his cousin, Robert Holliday, founded the Pennsylvania College of Dental Surgery probably encouraged John’s choice of profession. In 1870 he enrolled in the college in Philadelphia, and on March 1, 1872, he was conferred the degree of Doctor of Dental Surgery and 26 other graduates. Shortly after graduation, Doc Holliday began work as a dentist in the office of Dr. Arthur C. Ford in Atlanta.

Though an educated and respected man, John Henry was a hot-tempered Southerner and quick to use a gun. On one occasion, African American men were swimming in his favorite swimming hole, and the outraged Doc started shooting over their heads. While one of the black men shot back, no one was killed. This seems to be the first account of Doc’s love affair with the six-shooter, and the stories of the incident vary.

Shortly after starting his dental practice, Doc Holliday discovered that he had contracted tuberculosis – most likely from his mother before she died. His adopted Mexican brother was also diagnosed with the disease and later died from it, so he may have contracted it from him as well.

Doc consulted several physicians, who told him he had only a short time to live and was encouraged to move to a dryer climate to extend his life. So, in October 1873, Doc Holliday packed up and headed for Dallas, Texas, which was the end of the railroad at the time. However, Bat Masterson would write in 1907 that Doc moved due to the shooting incident back in Georgia.

Initially, Doc worked with another dentist by the name of Dr. John A. Seegar in Dallas. However, as the coughing spells wracked his body during delicate dental procedures, his business declined, and Holliday was forced to find another way to earn a living.

Out west, Doc was a most unusual character, a highly educated and refined man, where such things were uncommon. He was fluent in Latin, played the piano very well, was a “nappy” dresser, and displayed the manners of a Southern gentleman.

His intelligence made him a “natural” at gambling, which quickly became his means of support, where he was both an active participant and a poker and Faro dealer.  However, Doc was also miserable, with the knowledge of his impending death. He was moody, a heavy drinker, and perhaps was more prone to the life he ended up living with no fear of death.

The thin and weakened doctor knew that a career as a gambler was a dangerous profession, requiring that he have the means to protect himself. Dedicated, he started practicing with a six-shooter and a long, wicked knife, honing his skills.

The first account of a gunfight occurred on January 2, 1875, when Doc and a local saloonkeeper named Austin had a disagreement, which quickly turned to violence. While several shots were fired, neither man was struck, and both men were arrested, which was reported in the Dallas Weekly Herald. At first, the local citizens thought the gunfight was amusing until a few days later when Doc again got into a disagreement, this time killing a prominent citizen with two carefully aimed bullets.

Fleeing Dallas, with a posse right behind him, Holliday headed to Jacksboro, Texas, a wild and lawless cowtown near an army post. Doc found a job dealing Faro, now carrying a gun in a shoulder holster and another on his hip, along with the knife. Having become an expert shot, he was involved in three more gunfights in a short amount of time. Though he left one man dead in these gunfights, no action was taken against him in the lawless cowtown.

However, in the summer of 1876, disagreement again led to violence, resulting in Doc’s killing a soldier from Fort Richardson, which brought the United States Government into the investigation.  A reward was offered for his capture, and he was aggressively pursued by the Army, Texas Rangers, U.S. Marshals, local lawmen, and simple citizens anxious to collect the bounty.

Aware of the imminent hanging if captured, Doc fled for his life to Apache country in Kansas Territory (now Colorado). Making stops along the way in Pueblo, Leadville, Georgetown, and Central City, he left three more dead bodies in his wake. Finally, settling down in Denver, he assumed the name of Tom Mackey while dealing Faro at Babbitt’s House. Relatively unknown for a while, that changed when he got involved in an argument with Bud Ryan, well-known gambling tough. A fight ensued, and Doc nearly cut Ryan’s head off with his lethal knife. Though Ryan survived, his face and neck were mutilated. Public resentment forced Doc to run again, first to Wyoming, then New Mexico, and finally back to Texas, where at Fort Griffin, he would meet both Wyatt Earp and “Big Nose” Kate.

While dealing cards at John Shanssey’s Saloon, Doc met Mary Catherine Elder Haroney, who went by many names but was most often known as “Big Nose” Kate. While the dance hall girl and prostitute was attractive, she did have a prominent nose. Kate was tough, stubborn, and with a temper that matched Doc’s. She said she worked the business because she liked it, belonging to no man, nor any house!

Wyatt Earp, traveling from Dodge City, was on the trail of a train robber Dave Rudabaugh. After being issued an acting commission as U.S. Deputy Marshal to pursue the outlaw out of state, he followed Rudabaugh’s trail for 400 miles.

Wyatt visited the largest saloon in town, Shanssey’s, asking about Rudabaugh. Owner John Shanssey said that Rudabaugh had been there earlier in the week but didn’t know where he was bound. He directed Wyatt to Doc Holliday, who had played cards with Rudabaugh.

Wyatt was skeptical about talking to Holliday, as it was well known that Doc hated lawmen. However, when Wyatt found him that evening at Shanssey’s, he was surprised at Holliday’s willingness to talk.Doc told Wyatt that he thought that Rudabaugh had back-trailed to Kansas. Wyatt wired this information to Bat Masterson, Sheriff in Dodge City, and the news was instrumental in apprehending Rudabaugh. The unlikely pair formed a friendship in Shanssey’s that would last for years.

In 1877, Doc dealt cards to a local bully named Ed Bailey, who was accustomed to having his way without question. Bailey was unimpressed with Doc’s reputation, and in an attempt to irritate him, he kept picking up the discards and looking at them. Looking at the discards was strictly prohibited by the rules of Western Poker, a violation that could force the player to forfeit the pot.

Though Holliday warned Bailey twice, the bully ignored him and picked up the discards again. This time, Doc raked in the pot without showing his hand or saying a word. Bailey immediately brought out his pistol from under the table, but before the man could pull the trigger, Doc’slethal knife slashed the man across the stomach. With blood spilled everywhere, Bailey lay sprawled across the table.

Knowing that his actions were in self-defense, Doc did not run. However, he was still arrested and incarcerated in a local hotel room, there being no jail in the town. Bully or not, a vigilante group formed to seek revenge on Holliday. Knowing that the mob would quickly overtake the local lawmen, “Big Nose” Kate devised a plan to free Doc from his confines. Setting fire to an old shed, it began to burn rapidly, threatening to engulf the entire town. As everyone else was involved in fighting the fire, she confronted the officer guarding Holliday with a pistol in each hand, disarmed the guard, and the two escaped.

CONTINUE READING THE ARTICLE ON LEGENDS OF AMERICA