The Gunfight at the O.K. Corral

Ike Clanton, Billy Clanton, Tom McLaury, and Frank McLaury have been itching for a fight all day. Earlier in the day, Ike and Tom had been pistol-whipped, in separate incidents, by the Earps. Swearing revenge, they have been seen down by the OK Corral, armed, and talking of killing the Earps.

Virgil Earp, the town marshal, enlists Wyatt and Morgan Earp, and Doc Holliday. Walking down Fremont street on the way to the OK Corral, Virgil hands Doc his shotgun in exchange for Doc’s cane. Doc has a long overcoat and conceals the shotgun underneath it as not to frighten the townspeople.

Sheriff Johnny Behan, who has just spoken with the Cowboys comes running up, and Virgil says “Johnny, I am going to disarm them.” Behan replies, “I have already disarmed them.” Knowing that Johnny is a Cowboy sympathizer, Virgil ignores him and continues on to the OK Corral, but holsters his pistol and puts Doc’s cane in his gun hand.

As the Earps approach the Cowboys, Morgan blurts out, “You sons-of-bitches have been looking for a fight, now you can have it!” All the Earps but Virgil have their guns drawn and pointed at the Cowboys. “Don’t shoot, I don’t want to fight!” exclaims Billy Clanton. “I have nothing,” says Tom McLaury, yet his shirt is untucked from his pants and he seems to be hiding a gun in his pocket.

“Throw up your hands!” yells Wyatt Earp. Virgil immediately follows with: “We have come down here to disarm you and arrest you. Throw up your hands – I want your guns!” Virgil was waving the cane about for dramatic effect.

In the tense moment that followed, Morgan and Doc cock their guns. Suddenly, Billy Claibourne, who was standing away from the area, bolts, and runs. Ike grapples with Wyatt, who was about to pistol whip him. The tension explodes and the fight begins.

Doc Holliday shoots Frank McLaury in the abdomen from less than three feet away. Morgan fires and hits Billy Clanton in the chest, knocking him backward against the nearby house. Billy, who was in the process of pulling his gun, shoots in Virgil’s direction. Tom jerks on his horse’s reins, trying to maneuver the horse between himself and his aggressors. Virgil stands in disbelief at all that was happening around him.

Morgan fires and hits Billy Clanton in the hand. Amazingly, Billy still holds the gun but slumps down against the house.

Wyatt’s pistol to goes off in a struggle with Ike, grazing the running Billy Claibourne. .

Wyatt and Ike continue to struggle against the side of Fly’s Rooming House. Tom and Frank use their horses as shields. Billy Clanton is wounded and dazed. Billy Claibourne vacates the scene. Virgil is still trying to get the Cowboy’s to surrender. Morgan and Doc are looking for clear fields of fire, now obstructed by the Cowboy’s horses.

It takes just a few seconds before the fight resumes.

Ike pushes off from Wyatt and bolts behind Virgil. Doc fires at Frank, who is now obstructed by his horse, and misses him. Frank continues to turn his horse around for better protection. Billy begins to switch his gun from his mangled right hand to his left. 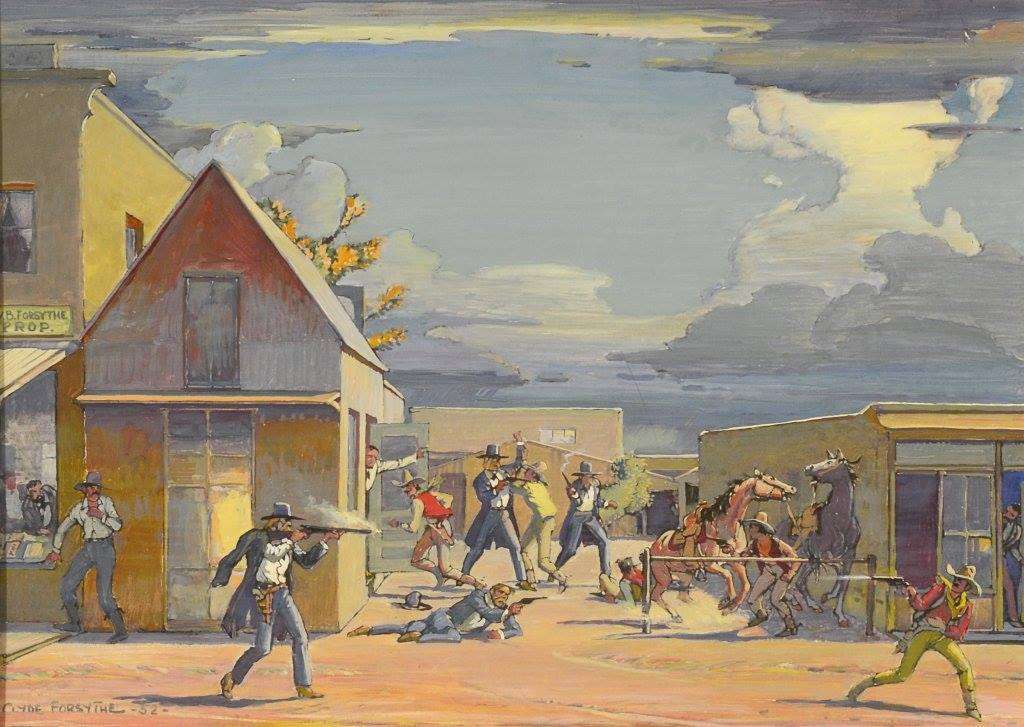 Even the Gunfight at the OK Corral would not be complete without a “second gunman on the grassy knoll.” One or two shots were possibly fired from the area behind Fly’s Boarding House known as the Stoop. Who was this mystery man? In the area were many Clanton allies, including Sheriff Behan, Billy Claibourne, Wesley Fuller, and Billy Allen. Many scholars charge Billy Allen with the deed, yet there is little clear evidence. Wyatt fires a single shot in the direction of the stoop to suppress further firing from that direction.

In any case, Tom McLaury is able to draw his concealed pistol and shoot over his horse at Morgan. By now, Virgil gives up on trying to make the Cowboys surrender, drops Doc’s cane, and draws his pistol. Doc, fearful of the position he is now in, holsters his pistol and draws the shotgun from under his coat. Frank, using his horse as a shield, circles the fight and waits for a good shot.

Tom quickly fires again at Morgan, this time successfully toppling Morgan backwards into the street. Billy Clanton, using his left hand, shoots at Virgil, missing. Virgil delays in any shooting for another few seconds. Frank has now completely circled his horse and prepares to shoot.

Wyatt takes a shot at Tom, missing him, but grazes his horse, causing it to bolt.

Frank’s first shot passes through the calf of Virgil, who stumbles and uses Fly’s house as support. Doc blasts Tom, whose horse has bolted, with the shotgun at point blank range. The shot sends Tom flying down the street.

Gravely wounded Billy Clanton tries another left-handed shot at Virgil but misses him. Wyatt takes a long shot at Tom, who has just been blown down the street by Doc’s shotgun.

Virgil turns to finish off Billy Clanton. Virgil shoots Billy twice, missing once, while Billy misses both of his shots.

Wyatt, Doc, and the wounded Morgan all lineup shots on Frank. Frank’s last words were to Doc: “I have you now.” Doc replies: “You’re a good one if you have.”

Four guns go off simultaneously. Doc is hit in the hip by Frank, and Morgan shoots Frank in the head, killing him instantly. 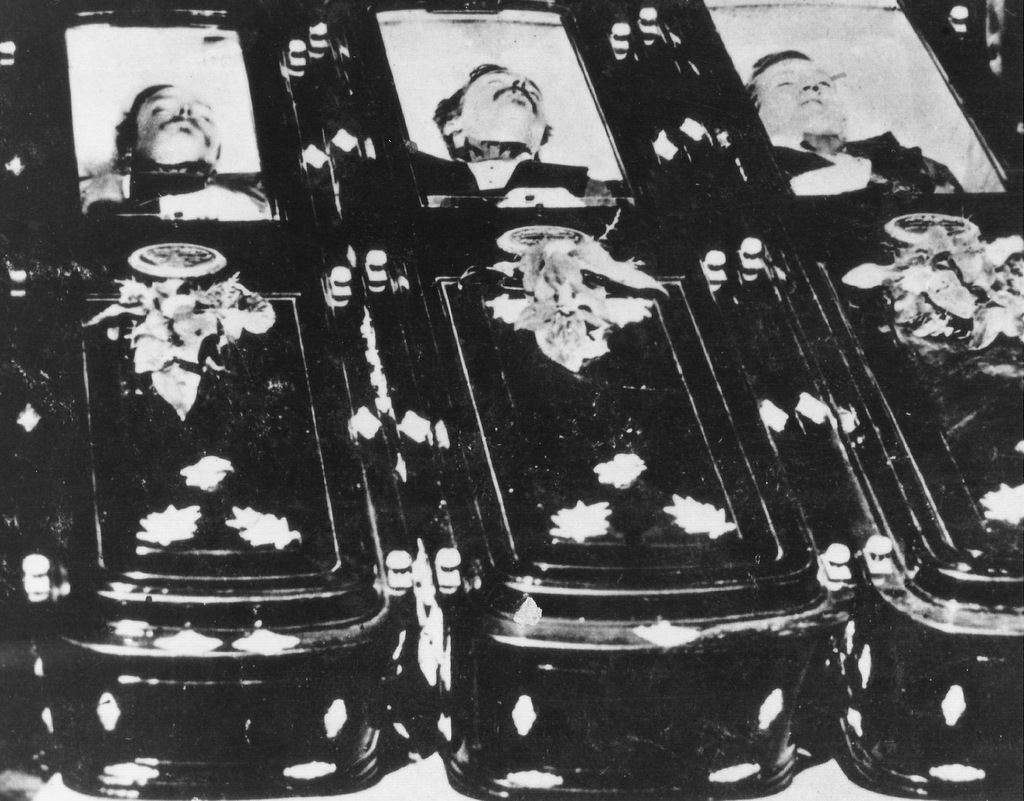 The dead of Tombstone: brothers Frank and Tom McLaury, and Billy Clanton

The fight was over as quickly as it began. Billy Clanton and Tom and Frank McLaury were dead.
Virgil, Morgan, and Doc are wounded, but live to fight another day.  Only Wyatt and Ike survived the fight unscathed.

And for the rest of us, the O.K. Corral gunfight lives on in retellings and reenactments!